The handful of executive condominium (EC) projects launched this year has seen mixed results. On the weekend of July 16 and 17, Sim Lian Group’s Treasure Crest EC opened for bookings. It saw 362 (72%) of the 504 units in the project snapped up over the two days at an average price of $742 psf.

Treasure Crest’s average price of $742 psf undercuts the other projects launched in the Sengkang-Punggol area in late 2014 to 2015. The four EC projects launched — Bellewaters, The Terrace, The Amore and The Vales — averaged $786 to $800 psf, notes JLL’s Ong. These four projects had land costs ranging from $331 to $367 psf per plot ratio (psf ppr) whereas Treasure Crest’s site was secured at $280 psf ppr, giving it the price-competitive advantage, he points out.

Beyond pricing, the spacious unit sizes of 958 to 1,345 sq ft were also a main draw, says Sim Lian Group. Location was pivotal, as the project is located in Sengkang New Town and a short walk from the Cheng Lim LRT station.

The previous weekend, Hao Yuan Investment launched its 358-unit Northwave EC. The project is located at the junction of Woodlands Avenue 12 and Gambas Avenue.

The contrasting performances of ECs launched within a week of each other was also played out in the Sembawang area three months ago. The third week of April saw the launch of Qingjian Realty’s 632-unit The Visionaire at the corner of Canberra Drive and Sembawang Road. The Visionaire was also positioned as an EC with Smart Home features.

The launch of The Visionaire was followed just a week later by that of the 628-unit Parc Life at Sembawang Crescent by Frasers Centrepoint and Keong Hong Holdings. The project is adjacent to Canberra Park.

As at end-June, 195 units (31%) at The Visionaire were sold at a median price of $811 psf. Meanwhile, Parc Life sold 82 units (13%), with the latest median price at $759 psf. The difference in sales could be due to The Visionaire’s proximity to the upcoming Canberra MRT station. Some agents reckon the Smart Home features also drew buyers.

Parc Life and Northwave were the two latest EC launches in the northern districts of 25 and 27, which include Sembawang, Woodlands and Yishun. ECs launched in these districts in 2H2015 still have unsold units, notes Emily Eng, director of residential services at OrangeTee.

“These ECs were also launched within weeks of each other,” notes OrangeTee’s Eng. “There is a larger supply pool in the north, and competition is therefore more intense. Much of the demand had already been soaked up by these earlier launches by the time Parc Life and Northwave made their [respective] debuts recently.”

The main concern now is that the supply of ECs has outpaced demand, says Desmond Sim, head of research at CBRE Singapore and Southeast Asia. The number of launched and unsold EC units across the island was 4,112 units as at end-June, almost double the total of 2,232 units a year ago.

The spike in the number of unsold units is also due to the higher number of EC projects launched in 1H2016 relative to 1H2015 (see table). However, the number of EC units sold in 1H2016 was 1,850 compared with 2,550 units in 2015. “As the absorption rate has slowed, there’s now a supply overhang, which is unprecedented,” notes CBRE’s Sim. “ECs used to be sold out at launch. Five years ago, you rarely heard about high vacancy rates in ECs.”

There were 2,901 vacant units out of a total stock of 20,351 as at end- 1Q2016, bringing the vacancy rate to an all-time high of 14.3%. The higher vacancy rate could be attributed to the higher number of new EC projects completed in 1Q2016, including CityLife@Tampines, Waterbay in Punggol, Twin Fountains in Woodlands (adjacent to Bellewoods) and The Topiary, which collectively added 2,015 units to the inventory of completed units. Some owners of these newly completed projects may not have moved in yet, which also contributed to the higher vacancy rate, explains Sim.

The high inventory of unsold units could lead to a new phenomenon: privatisation of units within the same EC at different dates, notes CBRE’s Sim. “In the past, ECs tended to be 100% sold prior to completion,” he explains. However, if some of the ECs launched recently are not fully sold when the Temporary Occupation Permit (TOP) is obtained, then buyers who purchase after completion will have their minimum occupation period effective from their date of purchase. “It will be similar to those buying HDB flats under the Sale of Balance Flats Scheme, where the MOP of five years is effective from the point of purchase,” says Sim. 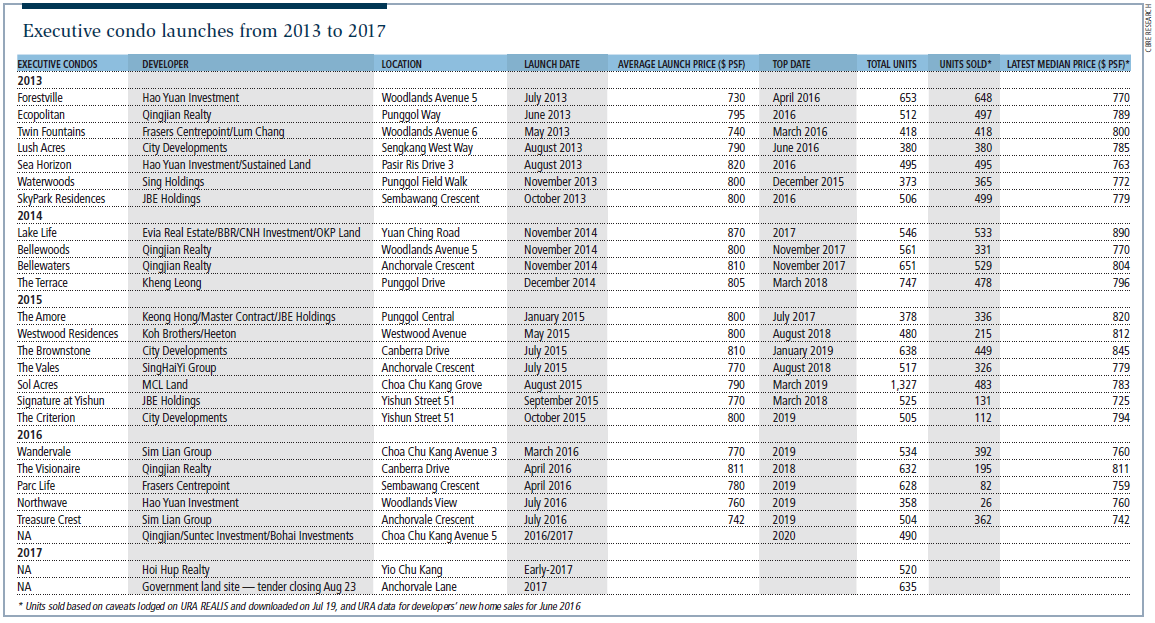 There is a silver lining to unsold stock in the EC market, as future supply has been curbed. Only one EC site has been put up for sale under the government land sales (GLS) programme this year. It was the recent launch of a 226,199 sq ft site at Anchorvale Link in Sengkang, which can be developed into a 635-unit project. The tender for the site will close on Aug 23. “URA and HDB are making a concerted effort to cut back on the GLS sites [allocated] for the development of ECs,” observes Sim.

There are only two other ECs in the pipeline for launch in 2H2016 and 1H2017. These are the EC at Choa Chu Kang Avenue 5 by Qingjian Realty in a joint venture with its investment arm Bohai Investments, and Suntec Investment; as well as an EC on Yio Chu Kang Road by Hoi Hup. “Going by the recent pickup in EC transactions, this will be a window of opportunity for developers to clear their existing stock,” says Eugene Lim, key executive officer of ERA Realty.

With the tender for the EC land parcel at Anchorvale Link closing on Aug 23, the earliest the new project can be launched will be 15 months later, which is end-2017, says OrangeTee’s Eng.

Unlike prime condos, ECs cannot be marketed overseas by developers, as they are a restricted product. And even though there is an option for EC buyers to take up a deferred payment scheme (DPS), most opt for the normal progressive payment because there is generally a 3% premium for the former, say property agents.

For example, at Treasure Crest, 85% of the buyers are said to have opted for the normal progressive payment, with only 15% taking up the DPS.

“EC buyers are very price-sensitive, so the 3% premium makes a lot of difference to them,” says Lim Yong Hock, key executive officer of PropNex Realty. “This is unlike the buyers of the completed prime condos that have recently offered DPS — they tend to be investors. EC buyers are 100% owner-occupiers who want certainty of purchase.”

Qingjian Realty offered to absorb the 3% premium for buyers who took up the DPS for three of its EC projects: Bellewoods and Bellewaters, which were launched in late 2014 and early 2015 respectively; and The Visionaire. This means buyers who opt for the DPS will pay the same price as those under the normal progressive payment scheme.

“Most people still opted for the normal progressive payment scheme at The Visionaire because the TOP is still some time away,” says a property agent who requested anonymity.

Conversely, the DPS scheme drew significantly more buyers at Bellewaters and Bellewoods. When the scheme with the 3% waiver for units purchased under DPS was launched in June, 43 units were sold at Bellewaters, making it the top-selling project in June, while 13 units were sold at Bellewoods. “Bellewoods and Bellewaters are expected to be completed next year,” says a property agent. “This gives buyers greater certainty to plan the sale of their existing HDB home, as they know when they are moving into their new EC. The DPS is therefore attractive to buyers in this scenario.”

According to CBRE Research, in mid-2015, there was also a 3% to 5% discount for selected units at Bellewaters and Bellewoods. The result was that more than 100 units were sold in each of the ECs in 3Q2015, according to caveats lodged. Both projects are substantially sold.

The MSR is more restrictive relative to the TDSR. Assuming a couple has a housing budget of $700,000, at 3.5% interest rate and a 25-year home loan, the couple will need to have a combined monthly household income of at least $9,345 to meet the MSR limit to buy an EC of that price. Under a TDSR of 60%, the combined household income would only need to be $4,672 a month to afford a $700,000 private property, estimates ERA’s Lim.

The increase in the monthly household income ceiling for EC buyers from $12,000 to $14,000 last August has also received a mixed response from buyers. While the pool of eligible EC buyers may now be bigger, those in the $12,000-to-$14,000 income bracket may still eye private property as being more attractive, as their prices have softened, says JLL’s Ong.

Owing to the uncertainty in the economy and the job market, households with a combined monthly income of $10,000 may opt for “the safer choice” of buying BTO (built-to-order) flats instead of ECs. “This could further reduce the demand for ECs,” says Nicholas Mak, executive director of SLP International.

Prices of private condos have generally softened by about 10%. By comparison, JLL’s Ong notes, prices of new EC projects have been more sticky downward and have fallen just 4% in mid-2016 from the peak of $826 psf in 1Q2015.

Given the price gap, ECs are therefore still relevant in today’s market and serve the needs of the sandwiched class, says OrangeTee’s Eng.

For now, with a supply overhang of more than 4,000 unsold units — equivalent to the supply from eight projects — and slowing demand, the EC market may look bleak. As future supply shrinks, however, the unsold inventory will eventually be soaked up. “Over the long term, EC prices tend to be more resilient than those of private condos,” says Lim. “There is still demand for ECs, but buyers have a lot more choices.”

This article appeared in the The Edge Property pullout of Issue 738 (July 25, 2016) of The Edge Singapore.